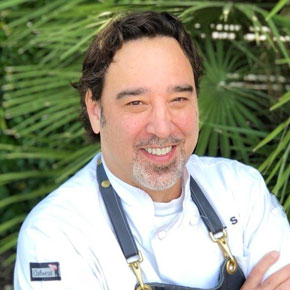 Born in the Panama Canal Zone to a Colombian mother and American father, Dorian Mills found his calling in his teenage years, when he often cooked for groups of friends during beach trips to Playa Gorgona. After moving to Austin in 1978 to attend the University of Texas, he entered the restaurant world in 1982 by helping open the very first Chuy’s, the funky Austin landmark that launched a Tex-Mex empire. Starting out as a server, he learned the ins and outs of the service industry there and at many other Austin restaurants, eventually working in every role from bartender to general manager.

Upon relocating to San Antonio, he got his first taste of working in a restaurant kitchen at Trattoria Toti, a homey Italian joint that quickly established itself as a destination for pizza-lovers in the know. With already 15 years of experience in restaurant management, Dorian’s move into the kitchen recharged his passion for food, and he helped run Toti for eight years, balancing his time between cooking and managerial duties. Dorian’s next move was to Farm to Market — a high-end, specialty grocery store that was ahead of its time but also formed the germinating seed for Silo Elevated Cuisine, the New American institution Mark Bliss opened in 1997. His various roles at Farm to Market fed into working at Silo, where he developed a greater understanding of fine dining. Dorian then accepted a position as executive chef and general manager of Guenther House, where he implemented the restaurant’s classic comfort fare with customized menus created for a diverse array of catered events. In 2008, he reconnected with Mark Bliss to open the small-plates concept Nosh. Following a brief stint in Miami, he returned to San Antonio in 2010, worked briefly as sous chef at The Grill at Leon Springs and then once again joined Mark Bliss to open his namesake restaurant in 2012.

Starting out as sous chef and now overseeing every imaginable detail as general manager of Bliss, Dorian continues to build on his 35 years of restaurant experience. His exceptional understanding of both the front of the house and the back of the house informs a managerial style that’s both approachable and hands-on. Often drawing culinary inspiration from his Latin American roots, Dorian is constantly experimenting with new ideas and concepts — possibly best evidenced by the seasonally inspired soups that help round out the menu of New American signatures. When his unwavering curiosity isn’t taking shape in reading, research or developing new recipes, Dorian can often be found playing soccer or cycling San Antonio’s bike paths.