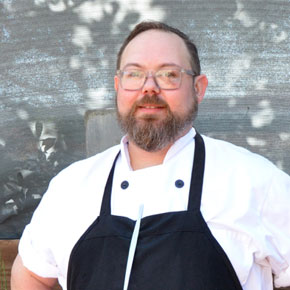 A native of Fort Scott, Kansas, Zachariah Hill studied restaurant and hotel management at the University of Missouri before finding his true calling while attending the California Culinary Academy.

“When I went to culinary school, I realized that side really fit me better than the front-of-the-house,” Zachariah explains. After graduating from culinary school in 2006, Zachariah landed an externship at the esteemed Restaurant Gary Danko. “That’s when I really started liking cooking,” he recalls. Although his prime area of focus was amuse bouche, he learned valuable lessons there that apply to all corners of restaurant menus. “It taught me how to take care of fruits and vegetables the way that I’m still teaching people today,” he says. Following that five-month stint, he landed his “first real cooking job” at Le Petit Robert, a quaint French bistro in San Francisco’s burgeoning TenderNob neighborhood.

After a decade working between San Francisco and Sacramento restaurants, Zachariah relocated to San Antonio, where his brother was already living. A valuable player in the Bliss kitchen since 2019, Zachariah was promoted from lead line cook to sous chef in 2022. As second in command under Chef de Cuisine Tony Hernandez, he oversees all food prep and ensures the line is running smoothly. Intriguingly, one of his favorite aspects of the job is knife work. “That’s kind of soothing for me,” he says with a laugh. He’s also a big fan of the duck and foie gras entree, a longtime favorite at Bliss. “It’s just a killer dish,” he says.

A Kansas City Chiefs superfan who’s even been known to impersonate Coach Andy “Big Red” Reid on occasion, Zachariah enjoys spending his days off playing disc golf, hanging out with his cat Corndog, exploring area restaurants and cooking at home with his wife Brittany Hill — who happens to be our front-of-house co-manager. Adorably, Zachariah and Brittany met on a blind date at Bliss and got married in January of 2019.