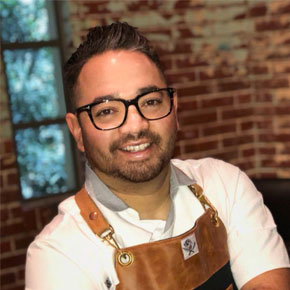 Born and raised in the heart of San Antonio, Tony Hernandez found his calling to cook in high school while working at a local steakhouse.  Over the years he embraced his love of food while working at some of the top restaurants in San Antonio.  During this time, he fine tuned his skills and developed a full-fledged passion for creating and developing his own cooking style.  Chef Tony has earned a reputation as an individual with an excellent work ethic.  Tony has a vast knowledge of many cooking techniques and cuisines and he’s known to run a “tight ship”.

Working at Bliss since its inception, Chef Tony has worked his way up from lead sauté chef to sous chef.  In 2016, Tony earned the prestigious role as Chef de Cuisine.  Tony has enjoyed serving the foodies of San Antonio at Bliss Restaurant since 2012 and has played a key role in  bringing Bliss Restaurant into the forefront of San Antonio’s exciting and growing culinary scene.

Chef Tony believes continuing education and professional development are essential to success in the culinary field.  For inspiration, he likes to stay current by traveling and experiencing new cuisines.  He spends his free time building his collection of culinary texts to immerse himself in his craft.